In Blockchain We Trust. The Book of Banks and Blockchain

Our Thought Leadership Blogs / In Blockchain We Trust. The Book of Banks and Blockchain Various types of financial institutions all around the globe have been investing time, money, and resources in the ability to know all about blockchain by the beginning of 2018. The very word is being heard from all possible directions, and only the lazy haven’t at least tried to conceptualize the drastic nature of the changes the technology is about to bring.

Banks and the Blockchain Relationship Explained: What It Looks Like

The game is as smart as it has always been. Whoever gets there first gets more of everything: trust, big data, customers — and, most importantly, profit. It is all about money.

Before humanity can even think about getting into the crypto-currency world and entering a new era of existence marked by peer-to-peer relationships, banks have no choice but to do their best not to let it happen, for obvious reasons.

Rather than being defeated, the system is trying to keep up with blockchain technology and embrace (read: swallow) it for their own benefit. Know Your Enemy, or Blockchain In Finance-Use Cases

If we speak about the technology being integrated into our day-to-day lives, we are talking about it disrupting the usual financial-services industry. The connection is pretty obvious. Cryptocurrencies introduced blockchain, and for a long period of time, distributed ledger technology and blockchain, in particular, were solemnly regarded as part of Bitcoin.

Nevertheless, blockchain does exist beyond Bitcoin, and it is already powering plenty of businesses. Still, financial institutions look more excited about blockchain than anyone else. Apparently, there is a reason behind the interest.

Knowing the pros and cons of the banking industry, distributed ledger technology offers a solution to what we all don’t like about the current state of things. The new system is much like what we would only dream about:

Source: Linkedin
While these features oppose conventional banking to a certain extent, blockchain banking services do exist. Banks have already started to employ blockchain for the sake of not letting the many cryptocurrencies become the new bank. Researching where to pioneer in order to get to the most out of the market, banks are coming up with multiple ideas that have already been introduced and tested.

The conclusions are to be built on facts, and as of early 2018, here they are. The truly bizarre relationship of banks adopting blockchain while banning cryptocurrency looks like an arranged marriage to avoid a conflict of interest.

If you think about it, the concept of blockchain-based banking is a sort of an oxymoron: an originally-decentralized system being employed by a system that is centralized to the core.

With its use numbers growing, blockchain could become a universal safety measure for modern internet- and technology-based relationships in business, threatening to exclude banks as a mediator. No wonder the old banking industry is more than willing to have blockchain at its service.

This concept being so different from what the world is accustomed to, there is almost no reason not to use it.
Before we go any further, here are some examples of blockchain technology used in finance. If you are wondering why the giants are investing in  here’s the explanation: If we are to see this technology become widespread, especially throughout the banking industry, it’s up to governments to let their people believe in the power of the distributed ledger or not. In 2018, multiple ideas have been brought to life. Here are a few examples of what blockchain has been doing in the public sector. People enjoy exploring distributed ledger technology, as it allows them to step out of old and comfortable (or not particularly comfortable) patterns and open up to new possibilities.

Technology, in general, is as great as it can be nowadays. If we imagined a world in which the banking system adopted self-executing contracts, the following statements would result: 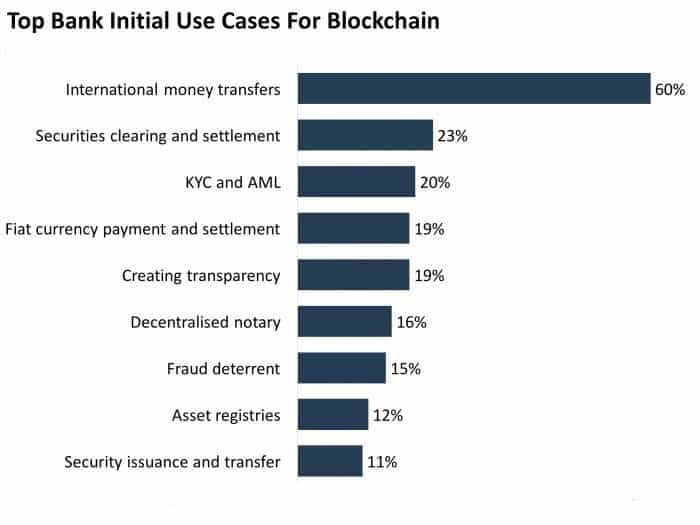 Simply by allowing self-executing contracts to work with shared access to certain types of data, financial institutions are able to improve several aspects of their services:

Focusing on preventing money-laundering is an expensive process. The aim is solid, and so are the efforts put into reaching the goal. Blockchain-based solutions could save banks a lot of money while saving their clients a lot of time.

Once more, save that money. The existing system is too complex to be fast. Verifying huge amounts of data from all involved parties takes many man-hours, and, as a result, costs more than is desired.

Even though the banks that have already implemented the technology by 2018 are numerous, blockchain financial services/use cases have not yet been fully studied, and the possibilities are close to endless: transactions are everywhere, and not even half of the seats are taken yet.

In 2017, the main uses of blockchain were as follows: Is DLT the New Future?

It is worth noting that the idea of a blockchain-based world is a form of belief. The more people regard it as a real thing, the more real it actually is. Since we are talking about money here, the more real it is, the more money you can make out of it.

It has already been 10 years since the seed of distributed ledger technology was planted, and now we are figuring out what to do with the fruits: unfolding the complexity of blockchain-based technology at full speed. Bitcoin, has stepped into the world hand in hand with blockchain, and revolutionized the common notion of money the most. This new idea of money logically manifested alongside a new idea of how it could function if we are brave enough to see and use the innovations offered by modern technology.

As with all great ideas, there are those who speculate on the notion, waiting for the change to occur, and those who are actually participating in turning the course of its development process.

By only reading this you are contributing to the existence of blockchain on the level of information.

We, in our turn, are offering the prasadam.